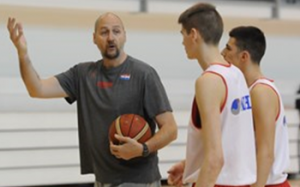 It is our honour and pleasure to announce that amazing basketball and legendary career of Dino Rađa, a great player, our former student and a lecturer on the International Joint Basketball Coaching and Management Study Programme, implemented by Lithuanian Sport University from Kaunas and the Faculty of Kinesiology in Split,  who is also head of expert advisory board of the Croatian Basketball Federation, has been awarded with entering the Naismith Memorial Basketball Hall of Fame. This is an act of acknowledgment for players who have shown great skills in basketball, such as coaches, judges and other persons who contributed extensively to the development and popularity of basketball. Only eight European basketball players have entered Basketball Hall of Fame so far including only three players from a small country such as Croatia (Sergei Belov, Russia (1992), Krešimir Ćosić, Croatia (1996), Dražen Petrović, Croatia (2002), Dino Meneghin, Italy (2003), Dražen Dalipagić, Serbia (2004), Arvydas Sabonis, Lithuania (2011), Šarunas Marčiulionis, Lithuania (2014) te Dino Rađa, Croatia (2018) and Mirko Novosel as a coach, Croatia.